Protesting for Pediatric Treatment: an Interview with Maurine Murenga

There was a definite high point for activists during the recently concluded 2019 International Conference on AIDS and STIs in Africa in Kigali, Rwanda. On December 3 Health GAP organized one of the only protests at the biennial conference, teaming up with Coalition PLUS, Sidaction, Treatment Action Campaign, GNP+, AVAC and other allies. Activists interrupted a presentation by U.S. Ambassador Deborah Birx, the Coordinator of the U.S. global AIDS program PEPFAR (the President’s Emergency Plan for AIDS Relief) by chanting “Wake up! our children are dying!”

We took over the stage, and HIV positive activists Maurine Murenga (from Kenya) and Oumar Coulibaly (from Mali) delivered a powerful call to action to Ambassador Birx. This protest was sparked by growing outrage that the pediatric treatment access crisis is not triggering the emergency response from our leaders it requires. 300 children with HIV are dying every day. Pediatric treatment coverage is faltering at only 54% globally, and pace of treatment scale up for children younger than 14 has flatlined over the last decade. In Uganda, Kenya, Tanzania and beyond, troubling new data show troubling indications of a resurgence of perinatal HIV, with increased numbers of new HIV infections.

I spoke with Maurine Murenga, Executive Director of Lean on Me Foundation, to ask her about why the fight for pediatric treatment access needs more activist attention.

Q. Why did you join the protest for pediatric treatment access? 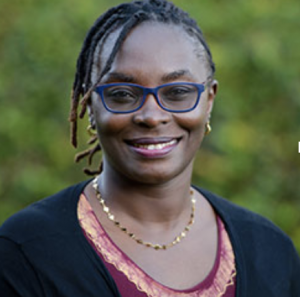 If you look at the statistics, we have very few children accessing treatment and a high number dying before they are diagnosed and put on treatment. Children  get the worst combinations of medicines. Currently in my country the pediatric ARVs have a bad taste and are heat sensitive although most women are too poor to have refrigerators. As a result, treatment quality is compromised and children and their mothers are put through torture as they struggle to administer treatment correctly. We live in an era where there have been multiple powerful advances in treatment for adults but children are getting second class treatment. It’s discrimination. I protested because I know that pediatric HIV is a crisis being ignored by our leaders. We can’t change this without more pressure.

When I had to break adult tablets for my child, unsure of whether he was getting the therapeutic dose of his antiretroviral treatment, I always thought that the children coming after him would have it better. But 16  years later, it is no better.

I have seen the pain mothers suffer. It’s a fight between the mother and the child and it kills the relationship women long to establish with their children. Young mothers often get depressed and feel traumatized. Some mothers break down just talking about how it feels to have to force children to take formulations that are simply inappropriate for children.

Q. What are the other barriers that have contributed to this crisis?

For adults it takes at most 20 minutes to know your one’s status and be initiated on treatment. While the benefits of early diagnosis and initiation on HIV treatment are evident, children have to wait a minimum of 6 weeks to be diagnosed, and even longer to get the results of their diagnosis and be linked to treatment and care. These delays accelerate disease progression and risk of death. We would never tolerate that for adults. These are clearly human rights violations.

In Kenya, there was recently a “Point of Care” (POC) EID testing pilot for newborns that was delivering powerful benefits to women and children by enabling HIV positive children to learn their status and to be linked immediately to lifesaving treatment. Women face huge challenges getting test results in a timely manner so this pilot was actually a game changer. But when the pilot ended, no donor stepped up to continue paying for it. Now there are POC EID machines just gathering dust.

There are huge gaps that are also driving this crisis. Take just one example–lack of access to viral load testing during the period of breastfeeding creates huge uncertainty among new mothers about whether they are putting their newborn at risk. Women are desperate and as a consequence resort to supplemental feeding with cow’s milk because they don’t have enough money for infant formula. In Kenya we have a strictly enforced breastfeeding policy, so they can’t even tell their health workers about their dilemma–they feel trapped.

I could go on and on–women aren’t getting the quality follow up and support they need to adhere. They are just started on treatment without any treatment literacy, community led retention support, or counselling. As a result pregnant women are falling out of care. In Kenya, index testing is also being implemented in a way that is essentially bullying women, resulting in an environment where women fear violence and retaliation from their partners and just give up.

Q. Pharmaceutical companies don’t see pediatrics as a market they can profit from—is  that also a factor?

Yes, definitely. They do not seem to understand that every life counts, no matter your age or where you live. These drug companies should wake up and be sensitive to the needs of young children. Every meeting, every conference I have been to, I have been telling my own story—I am so tired of giving my story. Defeating pediatric HIV is doable, but people are not doing their job.

And while the numbers are small for the pharmaceutical industry, global leaders should be looking at it the other way: fewer numbers of HIV positive and HIV exposed infants should make it easier for political leaders and technical experts to solve this problem.

Q. What would it take to change this crisis?

First we must have better quality treatment. We are so tired of this problem. Someone needs to go to work. Our children are dying, and our leaders are refusing to accept responsibility. Enough is enough: we demand affordable and appropriate pediatric medicine, full funding, and the community-led service delivery models that support women and their families in care.

Generic Licensing: the Only Path Through the Maze of Gilead and U.S. Patents that Achieves Access to Affordable PrEP
Rationale for Supporting Costa Rica’s Proposal for Emergency COVID-19 Technology IP Pool for All Countries

Time to Walk Away from the...