Swiss multinational company Roche faced global condemnation today from women living with cancer, families of people with cancer, activists, scientists, researchers and health professionals from across the world. They highlighted the immoral and unconscionable tactics employed by Roche across the developed and developing world. Roche’s greed is preventing women from accessing affordable versions of trastuzumab, an essential medicine used in the treatment of breast cancer.

The global day of action was led by women living with cancer in South Africa who gathered outside Roche’s office in Johannesburg demanding justice for Tobeka Daki – a leading cancer activist from South Africa whose own struggle against cancer ended last year.

“In South Africa today, we launched the Tobeka Daki Campaign for Access to Trastuzumab. In loving memory of a fearless activist who lead our struggle to ensure women could get this medicine,” said Salomé Meyer of the Cancer Alliance in South Africa. “Even as the likelihood of her being able to get trastuzumab diminished, Tobeka’s determination to ensure other women could access the medicine only grew stronger.”

Despite being a good candidate for trastuzumab, Tobeka was never able to access the treatment due to its high cost. In South Africa the annual price charged by Roche in the private sector is around US$ 38 365 (ZAR 516,700). The few public facilities which can access trastuzumab do so at a lower price of around US$ 15 735 (ZAR 211,920) per year. But, health economists have shown that a year’s worth of trastuzumab can be produced and sold for only US$ 240, a price that includes a 50% increase above the cost of production for profit.

Roche maintains its high prices in every way possible. Roche holds multiple evergreened patents on trastuzumab in certain countries across the world. In South Africa, for example, multiple patents extend Roche’s monopoly until 2033. In countries where the patents expired or do not exist, Roche is using other means to block potentially more affordable biosimilar versions coming to market.

“In India, Roche have embroiled India’s drug regulatory body and biosimilar producers in long-running and increasingly complex litigation to prevent the widespread availability of potentially affordable versions of trastuzumab,” said Kalyani Menon Sen, a women’s rights activist from India. “Even as Roche withdrew its patent applications on trastuzumab in India in the face of patent oppositions that were likely to succeed, it applied new ways to continue to be the sole supplier. We are demanding that they immediately cease all litigation against biosimilar products.”

In Brazil and Argentina, Roche is one of the pharmaceutical companies litigating against those governments for their attempts to use legal international safeguards to protect public health.

“The Brazilian government pays 73 times more than what health economists estimate trastuzumab could be sold for. It’s just too expensive,” said Graciela Rodriguez, a women’s rights activist from Brazil. “Worse now, Roche are also suing our government – through a case filed by Interfarma – for attempting to stop abusive patenting practices more broadly. Roche doesn’t like the fact that the Brazilian government have a system of examining patent applications and rejecting those that don’t meet our standards.”

“I stand in solidarity with people living with cancer around the world. The high cost of my own treatment has affected my ability to follow doctors’ orders to remain healthy,” said Timothy Lunceford-Stevens of ACT UP New York, a two-time cancer survivor who also lives with other disabilities. “I have been refused Pharma support programs because my government assistance program for people with disabilities disqualifies me. In the United States, seniors and people with disabilities are particularly vulnerable to the high cost of medicines by pharmaceutical companies like Roche, and the government’s system to help get medicines to patients is rigged.”

Melanie Kennedy, a breast cancer patient and mother of two from Northern Ireland in the UK said,

“Roche’s behaviour in South Africa is an outrage. The price they are charging for trastuzumab firmly puts their profits ahead of the lives of women with breast cancer. As a breast cancer patient in the UK this comes as no surprise. Roche are trying to charge a price for T-DM1, the drug I will need to take after trastuzumab, that is so high even the UK cannot afford it. Patients in the NHS are in the same situation as patients in South Africa – paying with their lives for Roche’s greed. They must drop the price – and if they don’t our governments must take action to protect women’s lives by over-riding Roche’s patent and securing affordable versions of their medicines.”

In 2015 Roche made US$ 8.9-billion profit. In the same year CEO Severin Schwan earned US$ 12-million. It is highly plausible that Roche could cut the price of trastuzumab dramatically and still be very profitable.

Who is Tobeka Daki?
Tobeka Daki was a single mother from Mdantsane township in South Africa who was diagnosed with HER2+ breast cancer in 2013. Following her diagnosis, Tobeka was informed that she needed trastuzumab, in addition to a mastectomy and chemotherapy, to improve her chances of survival. Despite being a good candidate for the treatment, Tobeka was never able to access trastuzumab due to its high cost. Her cancer metastasized and on 14 November 2016 she died in her home. She was unable to access this treatment due to the exorbitant price charged for trastuzumab by pharmaceutical company Roche.

Despite her declining health, Tobeka threw herself into advocating for access to healthcare for all women during 2016. In March she gave testimony to the United Nations Secretary General’s High Level Panel on Access to Medicines and led a picket outside the Roche offices in Johannesburg . In July, she shared her story at the International AIDS Conference in Durban and led a vigil at Roche’s conference display booth.  Later, in September she led a march to the offices of the Department of Trade and Industry calling on government to finalise delayed legal reforms that would improve medicine access in the country.

Today, it is impossible to definitively say whether Tobeka’s life would have been saved if she had been able to access trastuzumab treatment. However, there is clear evidence that trastuzumab would have significantly improved Tobeka’s chances of survival. A chance of survival that she and her family were denied – not for medical reasons – but rather because they could not afford to buy it.

What is trastuzumab?
Trastuzumab is recommended by the World Health Organisation as an essential medicine for the treatment HER2+ breast cancer. Clinical trials have demonstrated that the provision of trastuzumab, in addition to chemotherapy, improved the survival of women with early or locally advanced breast cancer by 37%. However, in many countries it is priced so high that governments cannot afford to buy it. Women pay the price with their lives.

*All conversions based on exchange rate at time of print.

What is T-DM1?
Trastuzumab emtansine (T-DM1) is another drug made by Roche for the treatment of HER2+ breast cancer. It combines trastuzumab with another drug resulting in better targeting of cancer cells, affording women who can access it months and often years of extra life with few side effects. The list price in the UK is £90,000 per patient per year and although Roche have offered a confidential discount, the UK’s medicines decision-making body, NICE, ruled it was still to expensive for the NHS in a preliminary ruling in December. Unless that decision is reversed when the final ruling is announced in early February women across the UK will lose access to the drug. Campaigners have called for the UK government to issue a compulsory licence (in UK law a Crown Use licence) allowing an affordable, bio-similar version to be developed and used by the health service. Taking such a step is likely to force Roche to offer a reasonable price to the NHS.

Why is Roche suing the Brazilian and Argentinian governments?
Brazil and Argentina have taken the challenge of maintaining universal public health systems, including free distribution of essential medicines to all. Many lives rely on these public health policies. As the dramatic increases on the price of new medicines is linked to the way pharmaceutical patents are examined and granted, Brazil and Argentina have created strict standards and procedures for patent examination in the pharmaceutical sector and have successfully blocked several undeserved patents, ensuring generic competition and price reductions. In 2014 and 2015, the associations of transnational pharmaceutical companies (INTERFARMA – Associação da Indústria Farmacêutica de Pesquisa in Brazil and CAEME – Cámara Argentina de Especialidades Medicinales in Argentina) went to court suing the national governments for adopting pro public health measures in intellectual property (IP) laws in the two countries. In Argentina, Big Pharma is challenging the national patent examination guidelines. In Brazil, they are challenging the participation of health authorities in the analysis of pharmaceutical patent applications (known as “ANVISA’s prior consent”). Both provisions aim to avoid the granting of unmerited pharmaceutical patents.

FRANCE:
Activists will carry out a publicity stunt in Paris to raise awareness of the lack of availability of trastuzumab

MALAYSIA:
Activists will gather outside Roche Malaysia and deliver a memorandum

SOUTH AFRICA:
500+ women with breast cancer & activists will gather outside Roche offices in Johannesburg and deliver a memorandum

U.K.:
Activists will gather outside the Association of the British Pharmaceutical Industry of which Roche is a member to deliver a memorandum to Roche.

ZAMBIA:
Activists from the Treatment Advocacy and Literacy Campaign (TALC) and people with cancer will deliver a letter to Roche c/o the Swiss Consulate in Lusaka 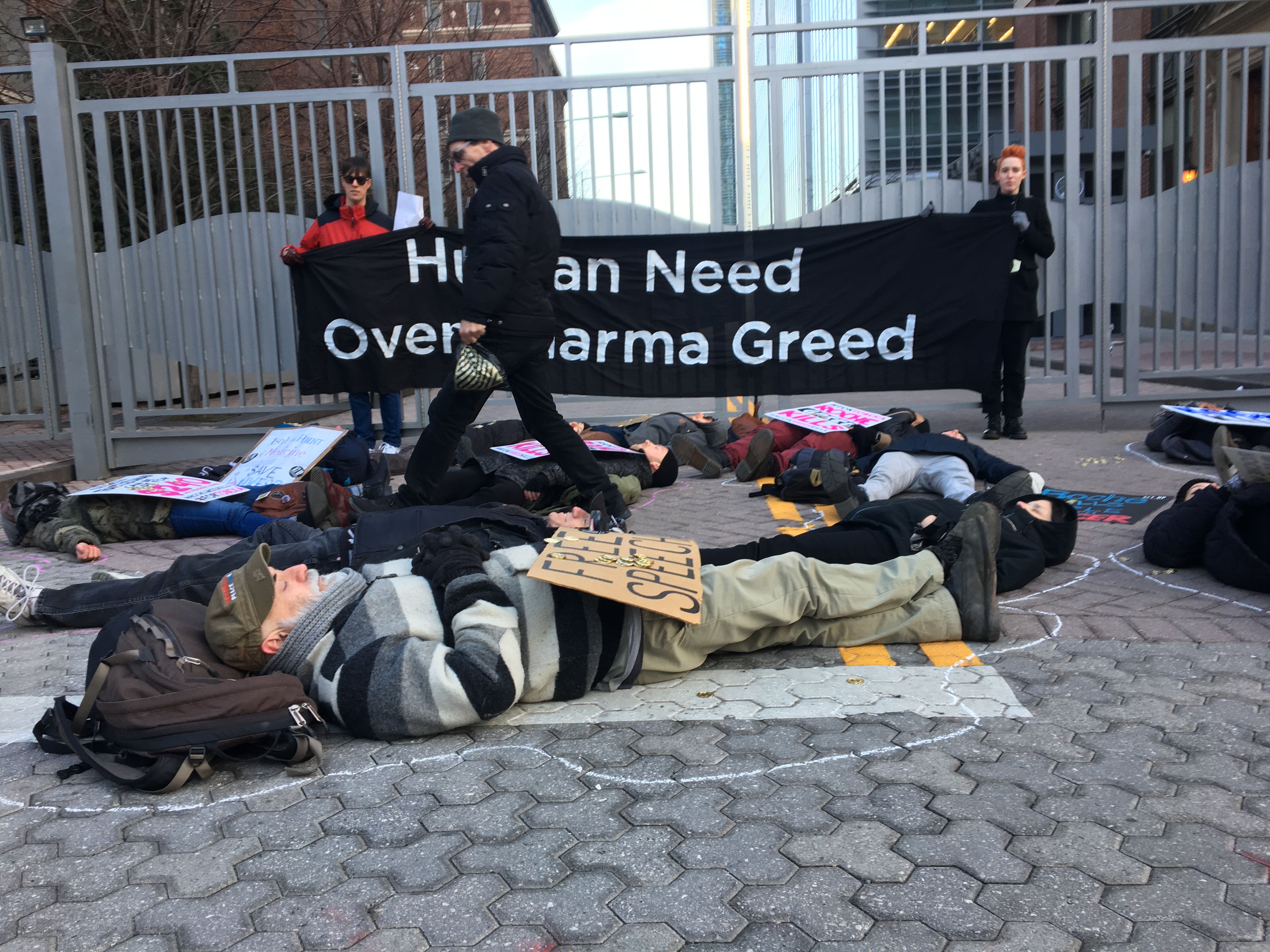 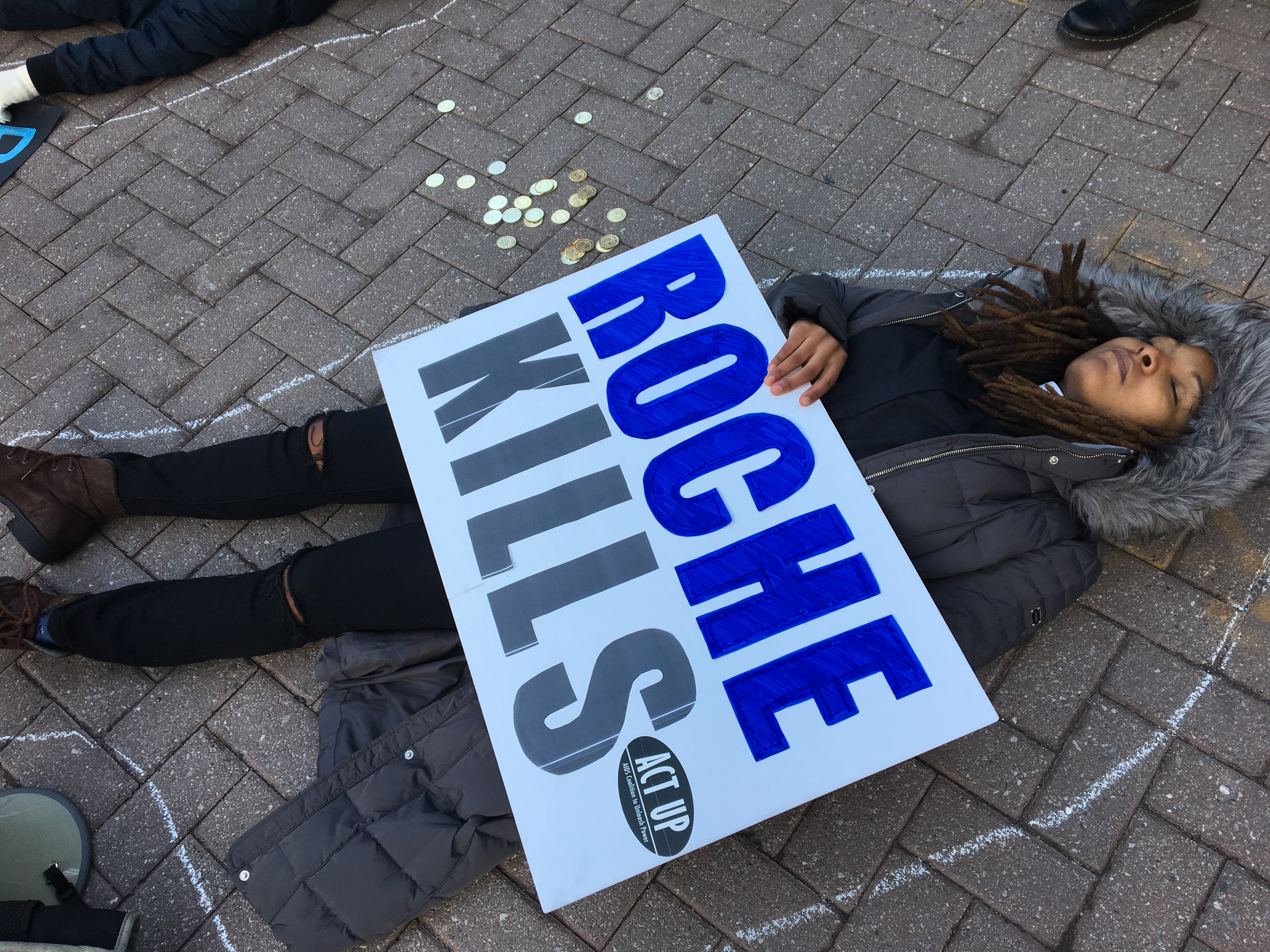 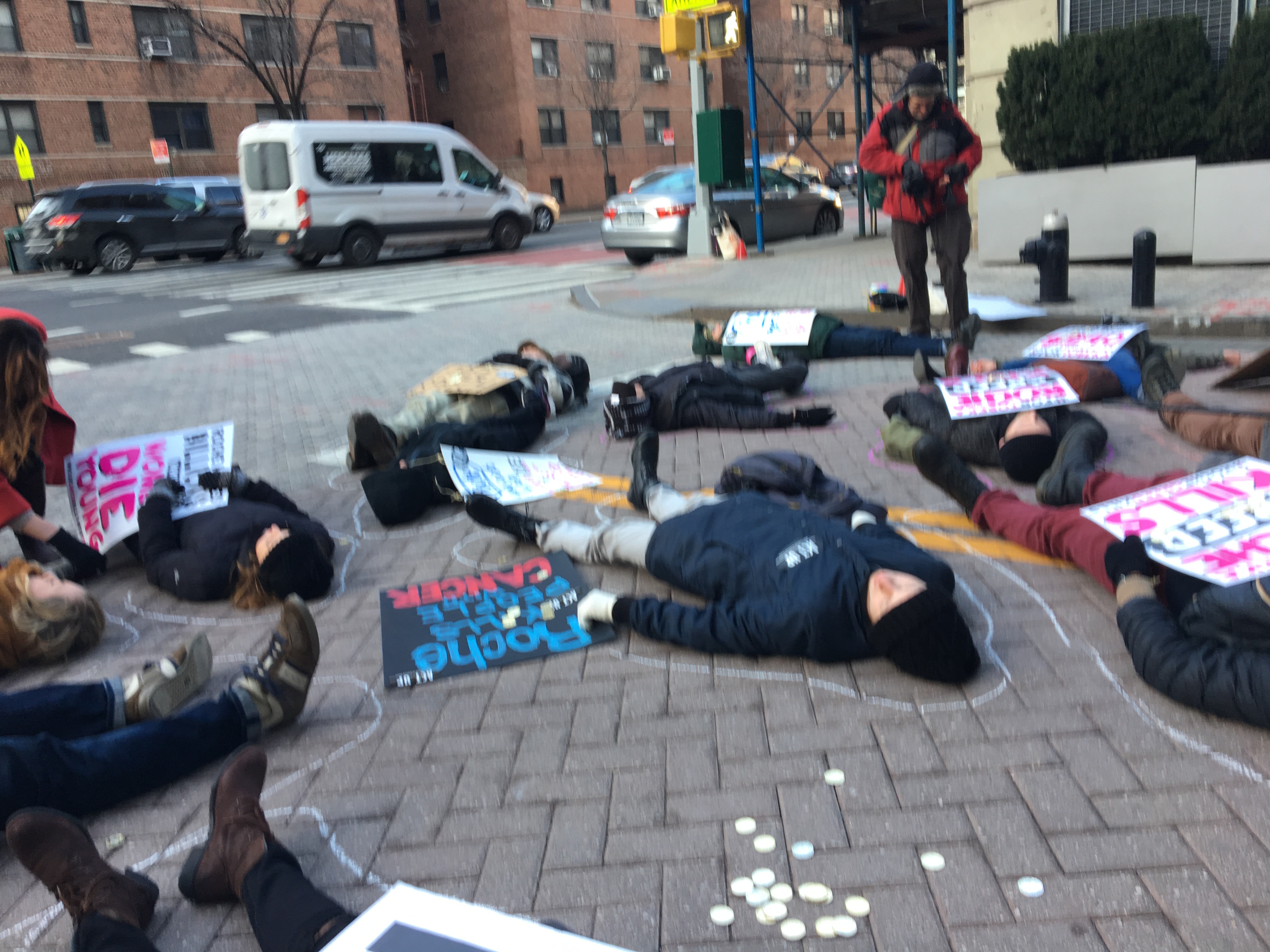 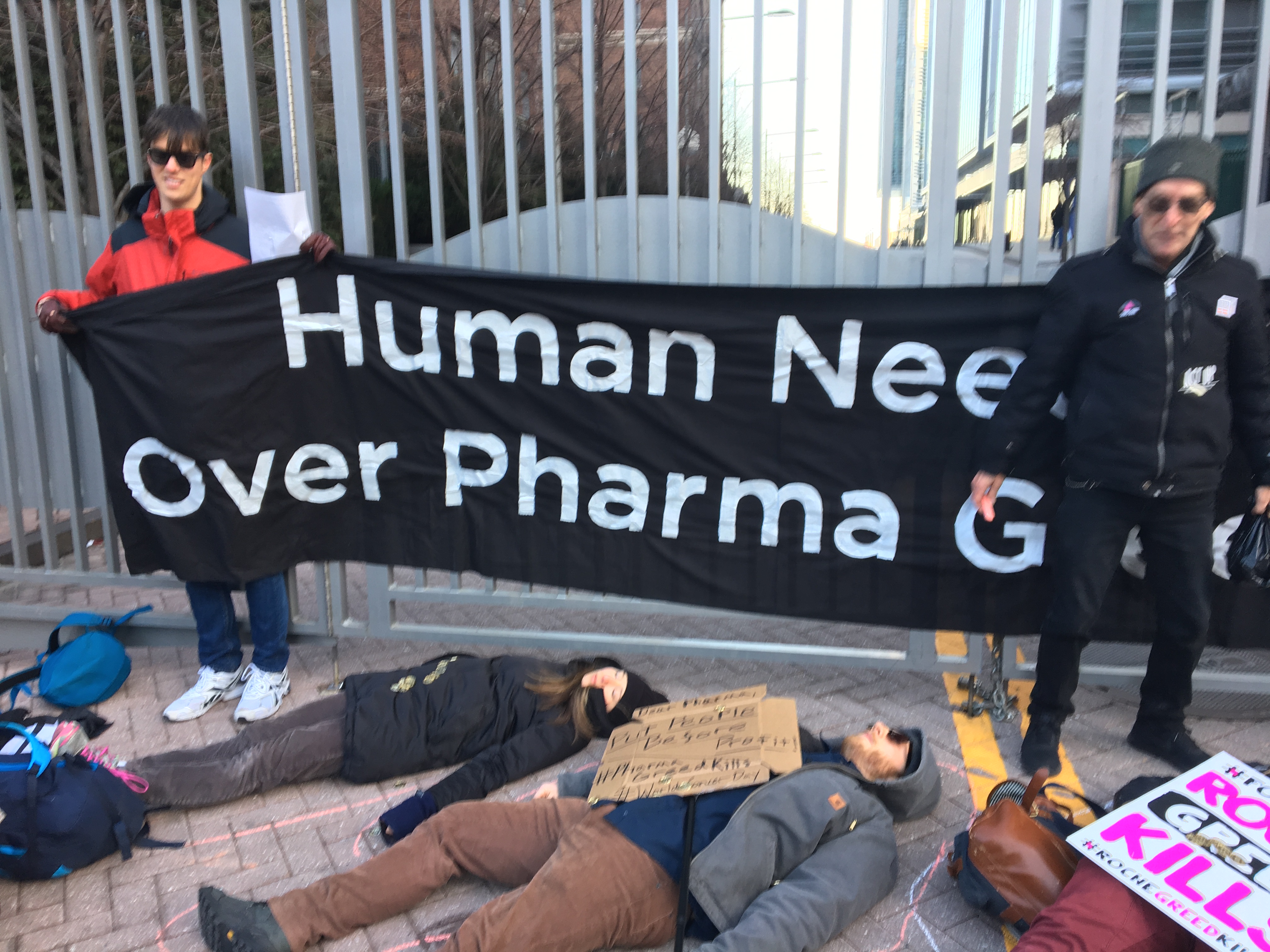 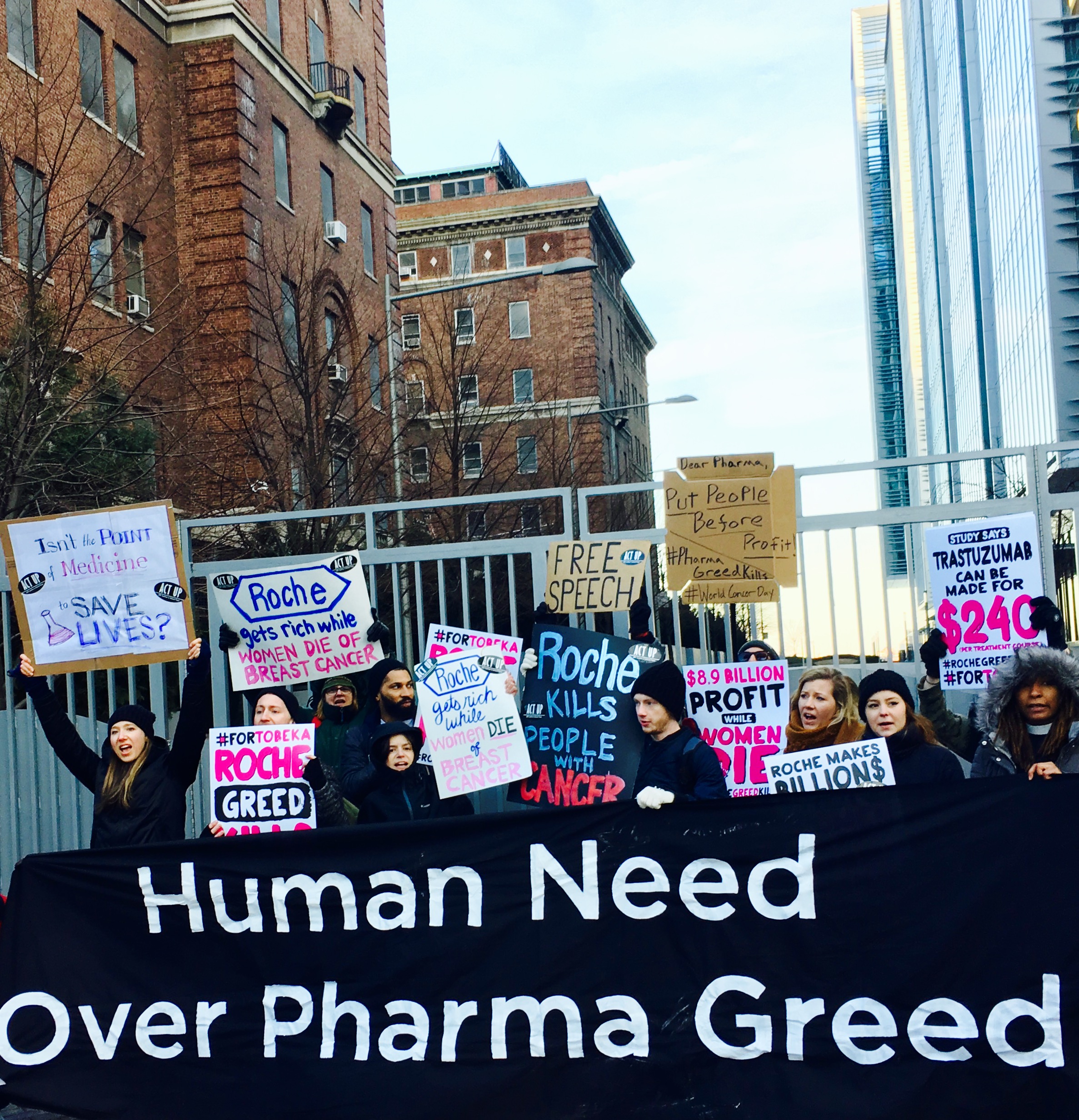 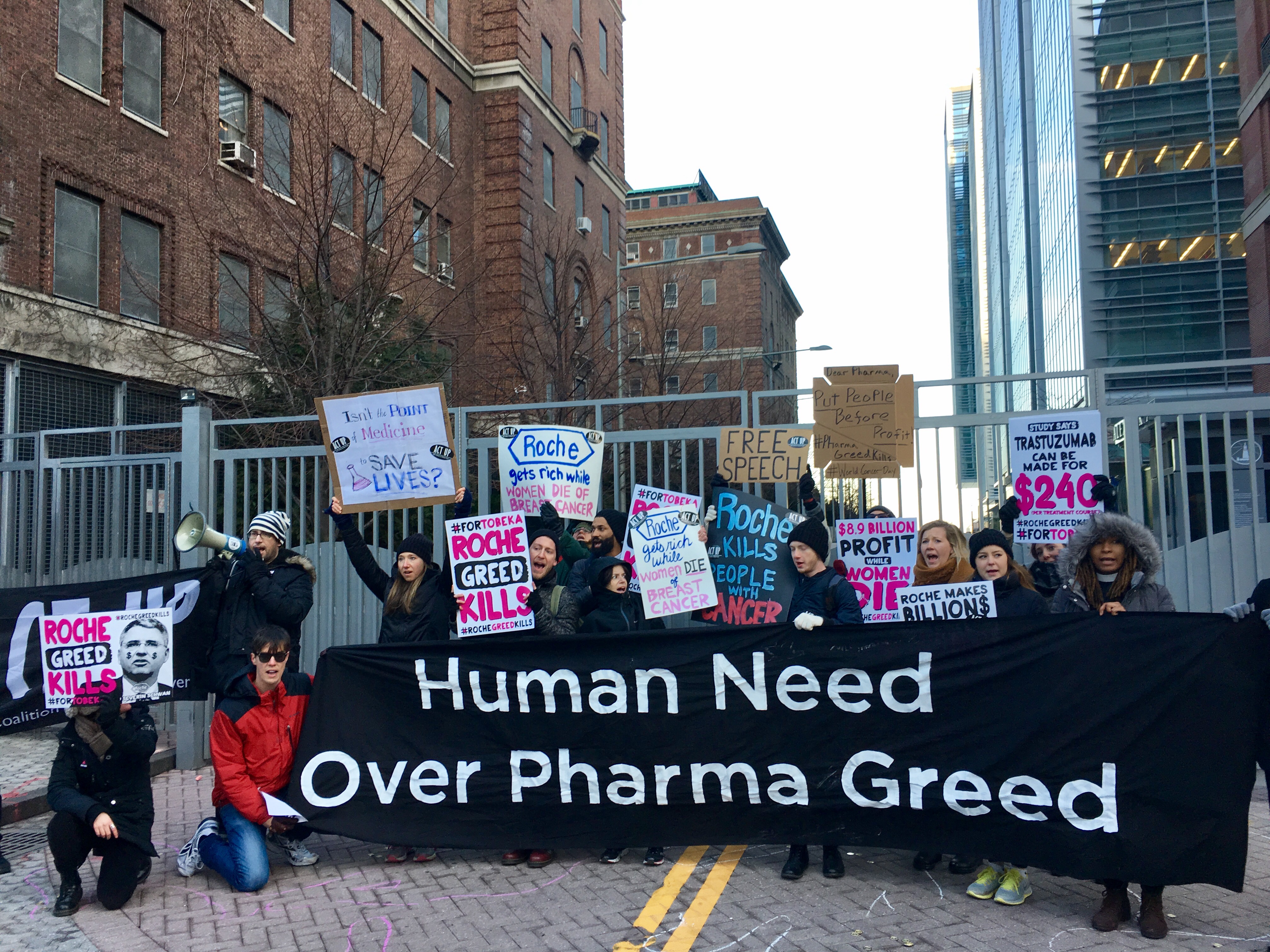 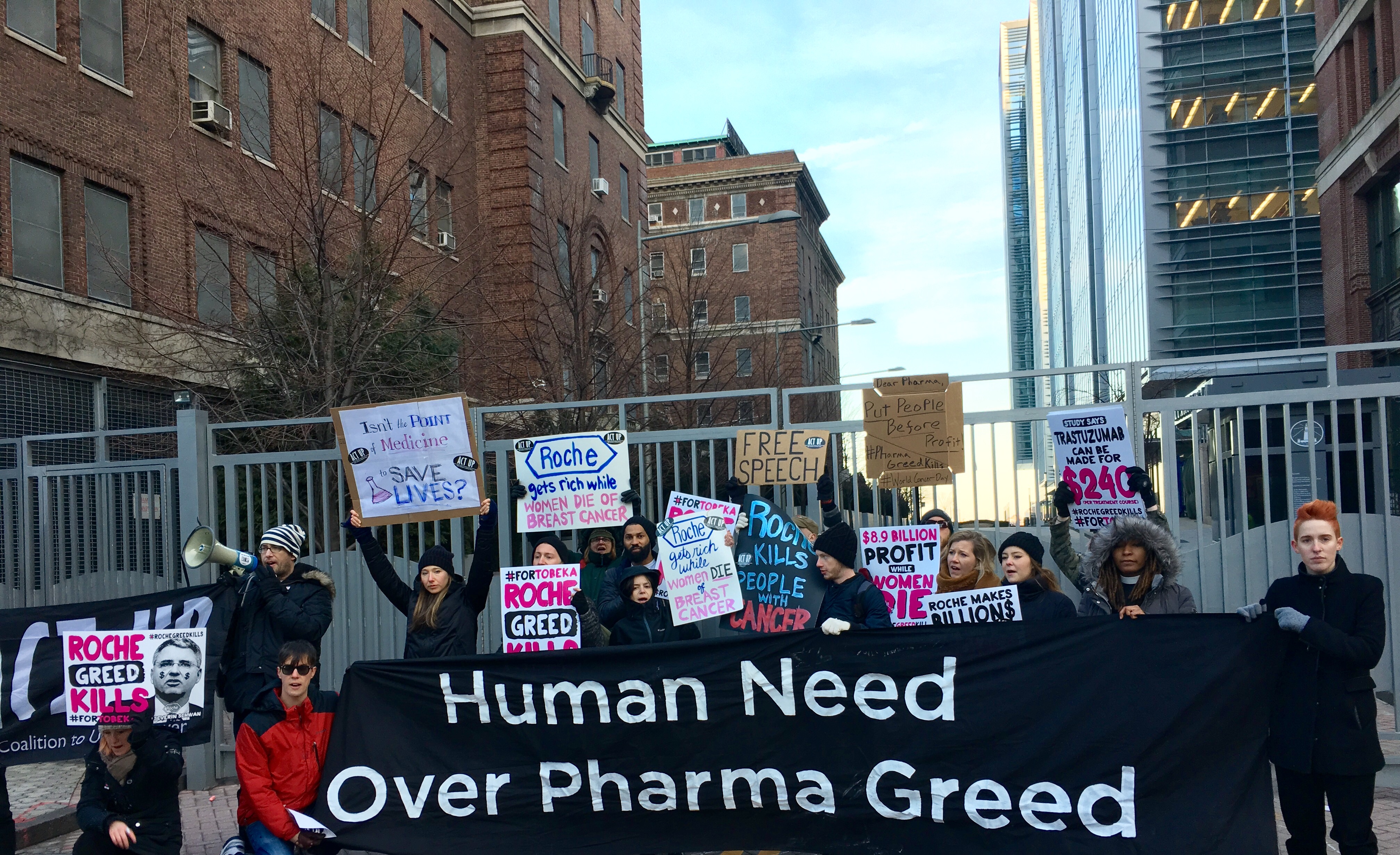 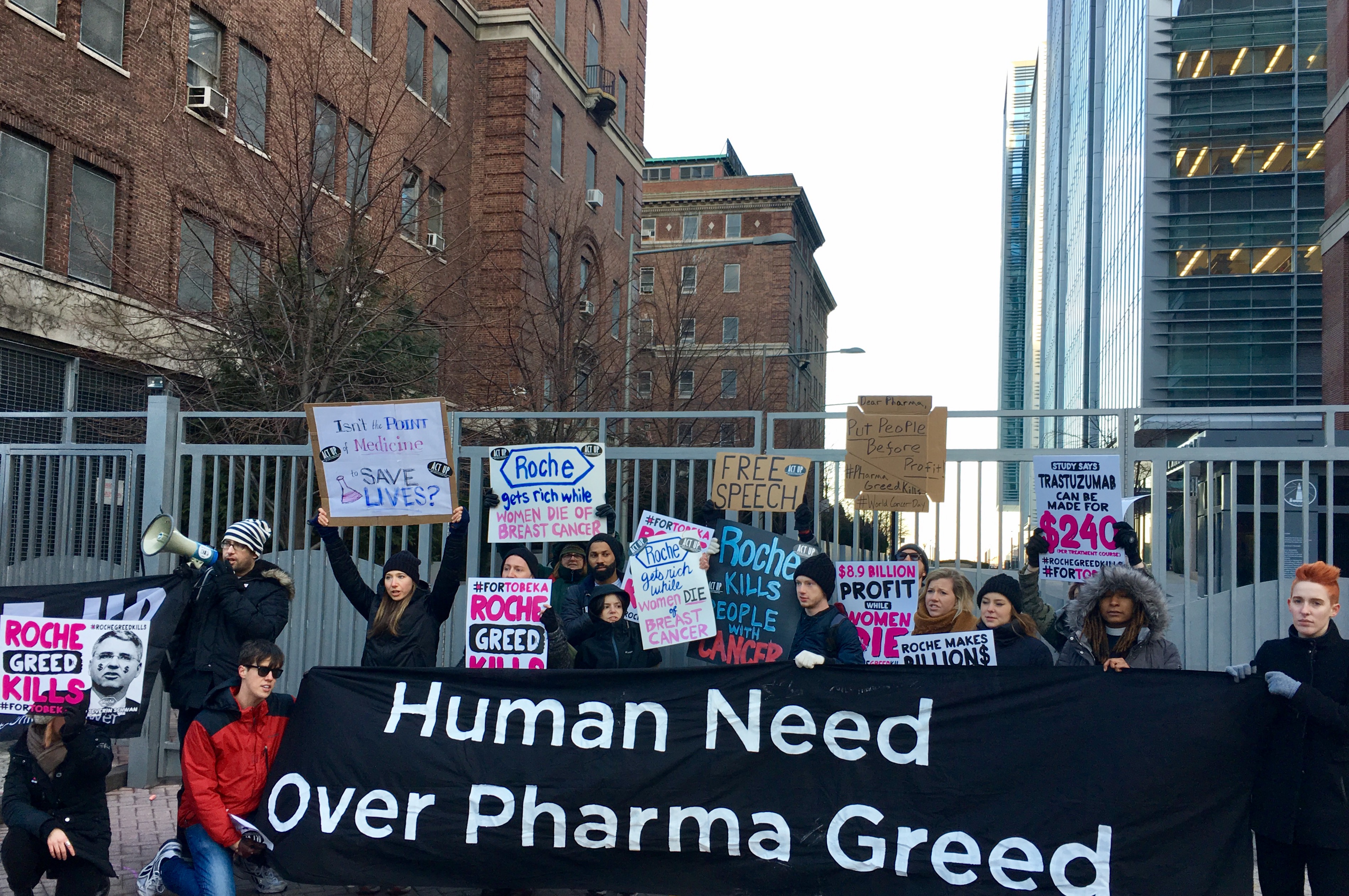 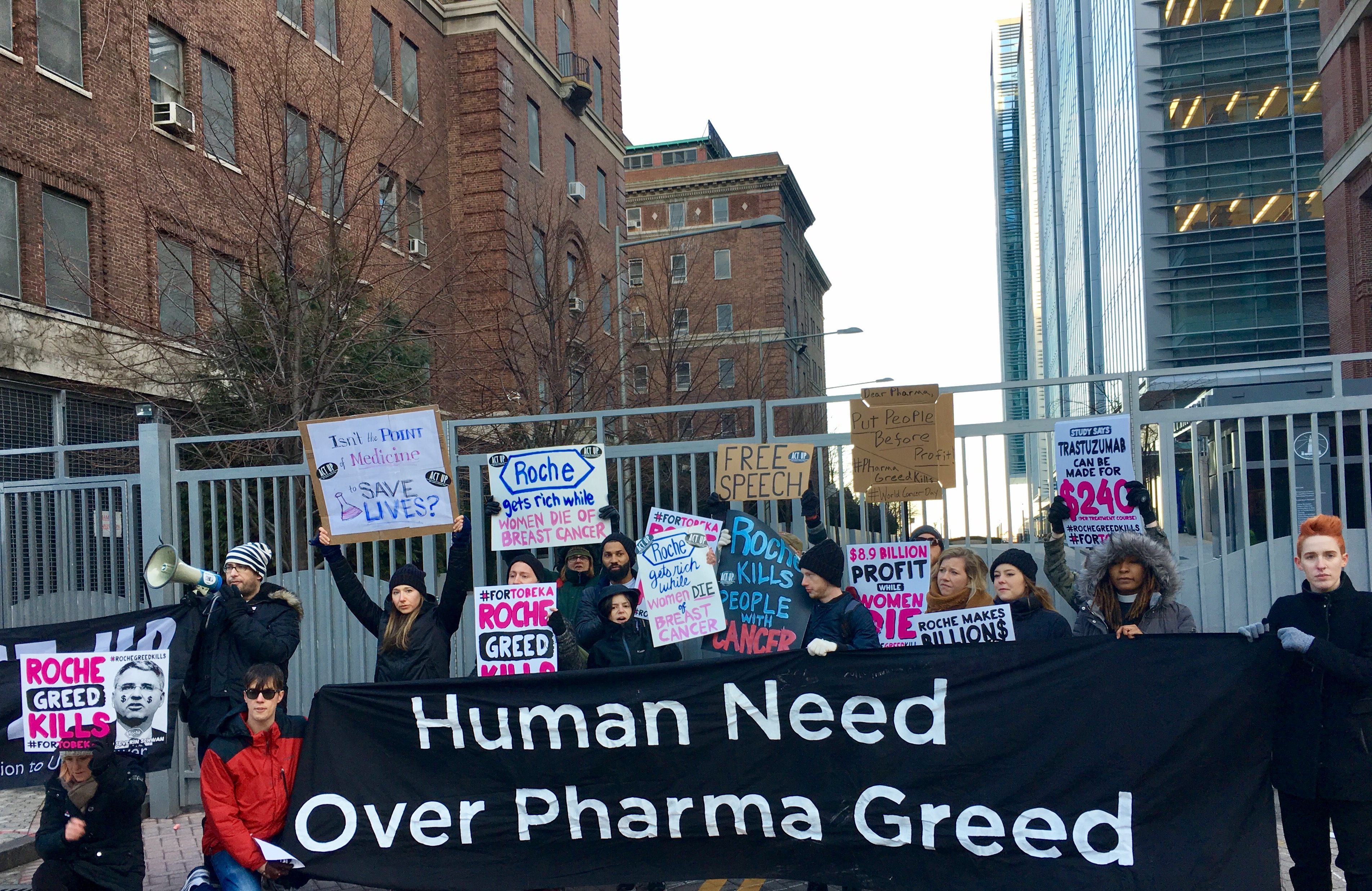 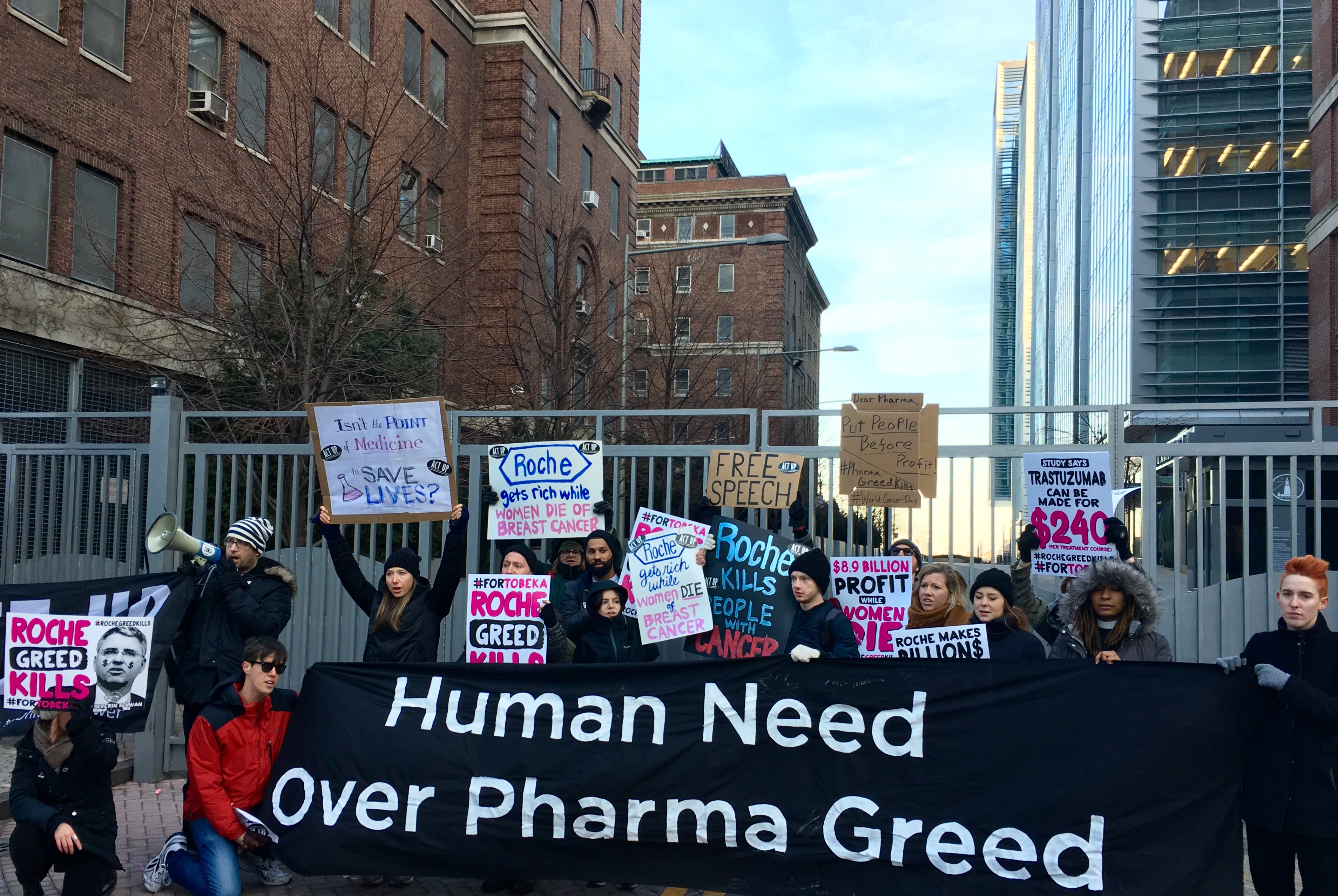 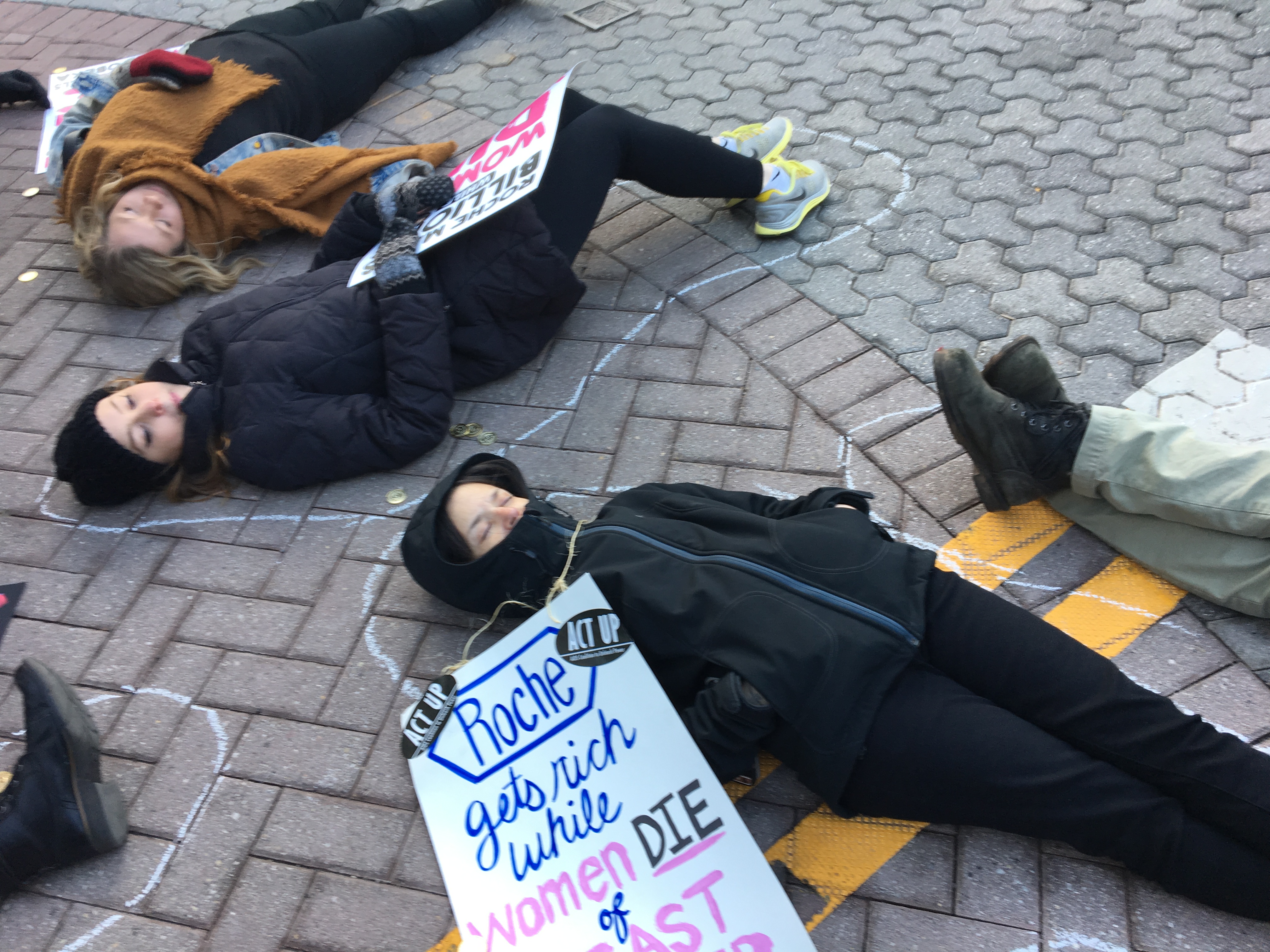